For over 30 years, Marines, their loved ones, and civilian contractors stationed and/or working at MCB Camp Lejeune and MCAS New River were exposed to drinking water systems contaminated with industrial chemicals. Numerous types of cancer, Parkinson’s disease, birth defects, female infertility, and other health conditions have been linked to these contaminants.

After years of denying justice to those harmed by the contaminated water, the Camp Lejeune Justice Act of 2022 recently became law, creating a federal cause of action to allow those who suffered from water contamination to file lawsuits for compensation.

If you or a loved one lived or worked at Camp Lejeune or MCAS New River for at least thirty (30) days between 1 August 1953 and 31 December 1987 and have been diagnosed with or experienced a qualifying medical condition, you may be entitled to significant financial compensation. The attorneys at MJA are ALL former active-duty Marines who will work tirelessly to give you the best possible representation.

Contact MJA today to determine your eligibility for the lawsuit.

The “Camp Lejeune Justice Act”, contained within the larger PACT Act (Honoring our Promise to Address Comprehensive Toxics Act), creates a federal cause of action for those injured by contaminated drinking water at Camp Lejeune, North Carolina.

The Camp Lejeune Justice Act allows any individual, veteran, or their legal representative to file a claim and bring an action against the United States for damages. The bill prohibits the Government from asserting immunity and requires the claimant to prove that contaminated water caused their injuries.

All claims for damages due to exposure to contaminated water at Camp Lejeune must be filed within 2 years after the bill’s passage. President Biden has indicated his intent to sign the bill into law if it reaches his desk.

To be eligible for a claim you must have: 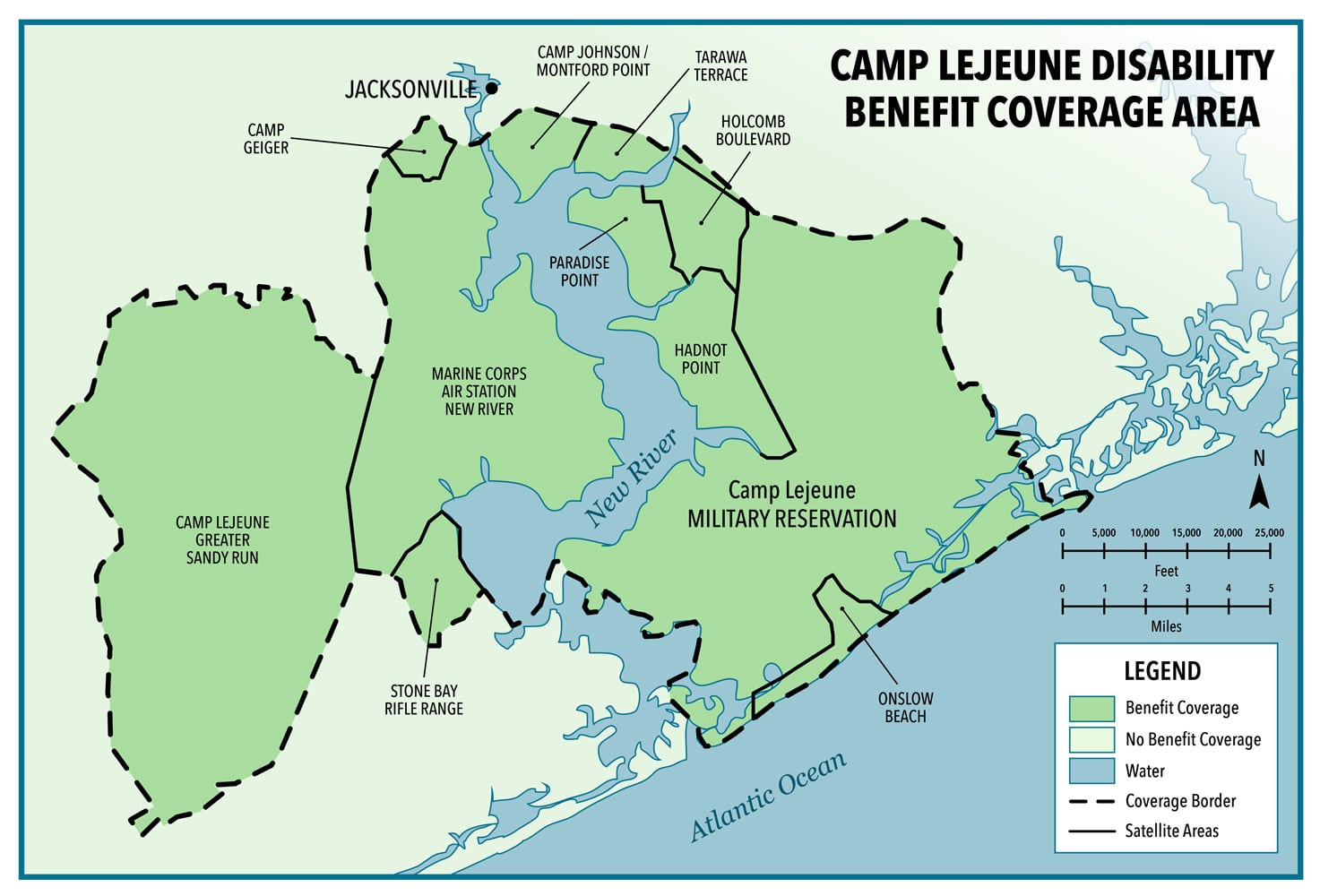 The VA had identified a number of presumptive conditions known to be related to the toxic water at Camp Lejeune. These are:

The VA also identified a larger list of conditions which may receive coverage. This list includes, but is not limited to:

In the 1980s, dangerous contaminants were found in several wells that provided drinking water to the residents of MCB Camp Lejeune and MCAS New River, North Carolina. These contaminants, listed below, leaked into the water from on-base storage tanks and industrial activities, and an off-base dry cleaner. The primary contaminants identified include:

Benzene found in groundwater often indicates contamination from refined petroleum products (e.g., gasoline, jet fuel, diesel fuel). PCE, another common groundwater contaminant, is a chemical widely used for dry cleaning fabrics and for metal degreasing operations. According to a Public Health Assessment conducted in 2017, “TCE and vinyl chloride were the chemicals that contributed most to the increased risk of cancer.”

It is estimated that nearly 1 million people were exposed to the toxic drinking water at Camp Lejeune from 1953-1987. This includes children living on-base, civilian employees who worked on-base, Marines permanently stationed there or in training, and dependent spouses. The contaminated drinking water could have adversely affected pregnant women and their babies, in particular, as “women in the first trimester of pregnancy are one of the most sensitive populations for exposure to TCE.”

This is not simply ANOTHER CASE for MJA. As with any mass tort litigation, if you have spent even a few minutes on Facebook or Google you have already been bombarded with advertisements from big name plaintiffs’ firms who specialize in mass tort litigation. Most of these attorneys never served in the military and certainly don’t know what it means to be a Marine. To them, this is just another case. No different than a hip implant litigation or hernia mesh lawsuit.

But to us, it’s different.

At MJA, ALL our attorneys were active-duty Marines. And so were our brothers, fathers, uncles, grandfathers, and closest friends. We understand what service and sacrifice mean and live by the motto: Semper Fidelis. It is for that reason that our entire law practice centers on representing active-duty service members and veterans. This is at the heart of who we are and what we do. We have served military service members before this litigation and will serve them after. As Marines ourselves, MJA will work tirelessly on your behalf. 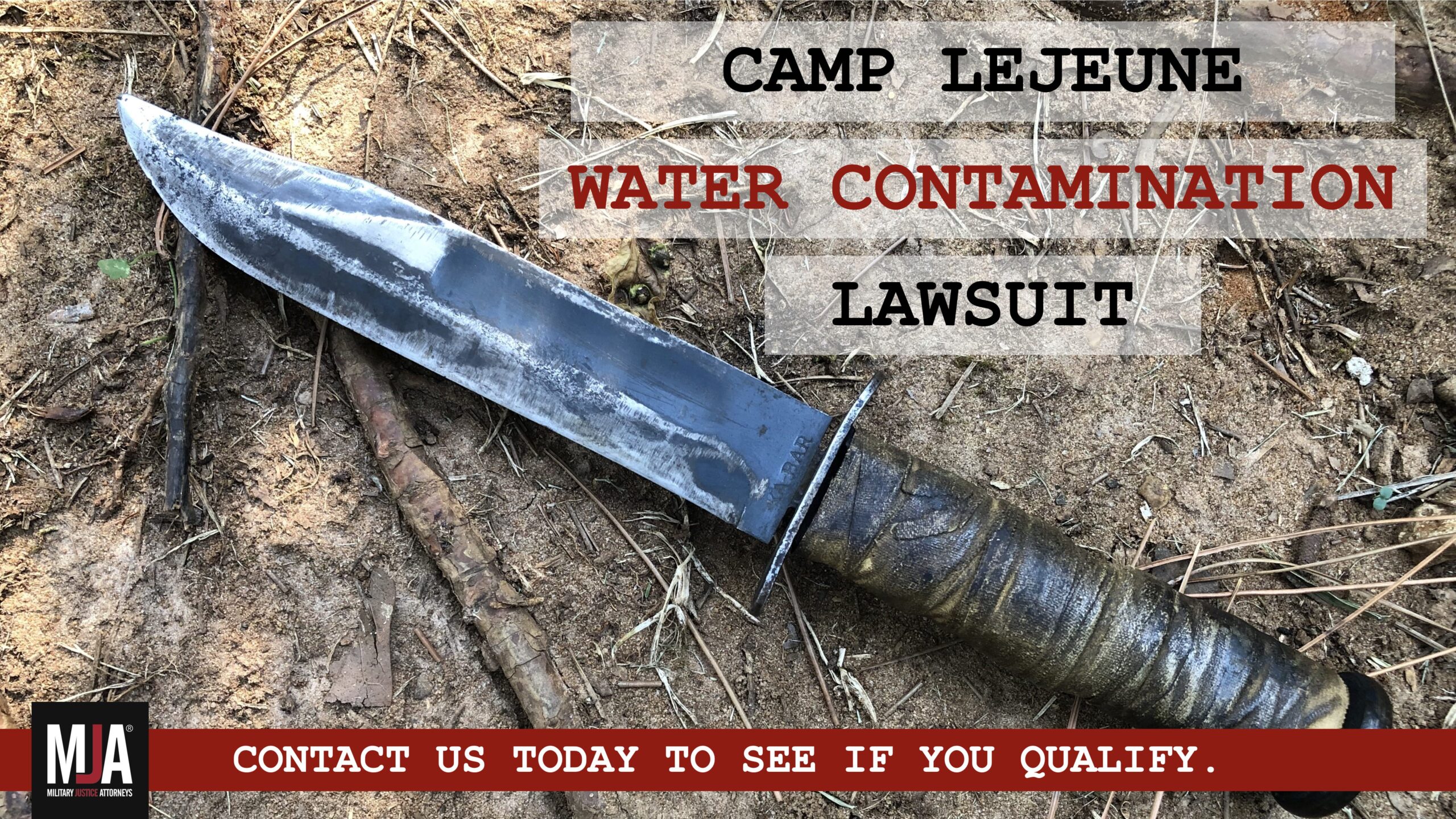 If you or a loved one lived or worked at Camp Lejeune or MCAS New River between 1 August 1953 and 31 December 1987 and have been diagnosed with or experienced a qualifying medical condition, contact us today to determine if you are for a lawsuit.