Mr. Gerald (Gerry) Healy, commissioned as a Judge Advocate into the United States Marine Corps in 2004. Gerry quickly earned a reputation as a fierce and tireless advocate for his clients. After rising to the position of Senior Defense Counsel in the Marine Corps, Captain Healy secured a notable number of acquittals in a jurisdiction boasting a 95% conviction rate and successfully argued the unlawful command influence of the Commandant of the Marine Corps in 2012. Captain Healy represented dozens of military clients in cases ranging from drug use and sexual assault to fraud and espionage over nearly a decade of experience before his honorable discharge from the Marines in 2012. He was awarded the Navy Commendation Medal for his tireless and successful efforts as a military defense attorney.

Since leaving active duty, Gerry has gone on to represent servicemembers in all military branches across the country and the world. Gerry was recently selected by the American Institute of Criminal Law Attorneys as “10 Best” criminal law attorneys in the State of South Carolina. In 2014, and 2015, American Society of Legal Advocates (ASLA) selected Gerry as one of the Top 40 Under 40 Criminal Defense Lawyers in the State of South Carolina.

Gerry has taught and presented at several national conferences and seminars on topics of military law, police interrogative tactics, and false confessions. Gerry is a member of several professional associations, such as National Legal Aid and Defender Association.

With experience as both a military lawyer and a civilian defense attorney, Gerry brings a unique perspective to the complex, formidable sphere of military law.

Gerry is a member of the Connecticut Bar. 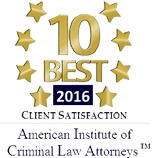